The Evolution of Cataract Surgery

Cataract surgery is currently one of the most common surgical procedures performed in the world. It’s also one of the oldest kinds of surgery in the medical field. This intervention has seen several advances over the years, both in terms of the techniques used during the operation and the intraocular replacement lenses.

What is a cataract?

A cataract occurs when the lens, the natural lens of the eye, becomes opaque. When the lens becomes cloudy, it prevents the light from passing through it in order to focus it on the retina. The light information received by the latter is then incomplete and does not allow it to perceive the images correctly.

From Antiquity to the Present

The first method of treating cataract was called "couching". The first information we have on this topic is about 2500 years old. Unlike the more advanced techniques used today, couching did not remove cataract from the eye. In fact, it moved it with the help of a needle. Once the cataract was displaced inside the eye, the patient could partially recover vision since the affection of the crystalline lens no longer blocked the light. It should be noted that this practice was obviously not optimal and included a lot of complications. The lack of sanitization and the non-removal of cataracts could cause more problems in the end than the cataract itself. Often, soon after the procedure, the patient was likely to have infections and even a capsular rupture (i.e. the lens broke and the proteins it contained spread through the eye and caused a severe inflammation that made the eye blind). Unfortunately, this technique is still practiced today in less developed countries.

It is about 250 years ago that the first attempts at cataract extraction took place. Initially, lens extraction was only partially done. This type of extraction was called "extracapsular" since the nucleus of the lens was removed, but its capsule remained inside the eye. One of the most common complications was uveitis caused by capsular remnants blocking the pupil by forming an opaque and thick membrane in front of it. Once again, the effectiveness of the intervention was almost nil as a second operation had to take place to correct the problems incurred by the first one.

A few years later, around the middle of the 18th century, a new type of cataract extraction appeared. "Intracapsular" extraction was the first intervention of its kind that removed the entire lens. Postoperative complications have significantly decreased and this practice became standard until about a few decades ago.

In the late 1960s, ophthalmologist Charles Kelman revolutionized cataract surgery by introducing "phacoemulsification". Using an ultrasound probe, it was now possible to extract the cataract by making a much smaller incision (3mm to 4mm) in the eye. Today, advances in surgical techniques, anesthesia and equipment have allowed surgeons to achieve higher levels of efficiency and safety. The arrival of the femtosecond laser has greatly helped to make cataract surgery one of the safest in the medical field. It has further improved its accuracy and customization. Now, surgeons can rely on 3D images of the eye to help patients achieve the best results. Femtosecond laser-assisted cataract surgery also helps to better position the replacement lens.

Technical advances over time are not negligible, but without intraocular lenses, cataract surgery would not be as effective. Indeed, before the 1950s, patients undergoing surgery were left without crystallin or lenses. Thus, their vision was significantly diminished compared to a person with healthy eyes, despite improvements achieved by cataract removal. It was only in 1949 that the first intraocular lens was implanted in a patient's eye to replace the cataracted lens.

The design of intraocular lenses has been continuously improved over many years. Today, thanks to these lenses and modern techniques, cataract surgery has become a refractive surgery, meaning that it also aims to correct vision problems, like glasses or contact lenses do.

The Bellevue Clinic uses the best technologies available to treat cataract cases. If you have a cataract, opt for an effective, personalized and safe surgery by making an appointment with us. Before your surgery, you will be able to attend an information session on possible surgeries and different types of intraocular lenses to make a more enlightened choice.

Do you have an eye problem and have a consultation request in ophthalmology? You can make an appointment online at the Bellevue Clinic. For any inquiries, please do not hesitate to contact us by email or by phone at 514-256-0007. 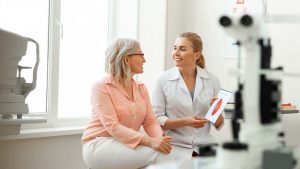 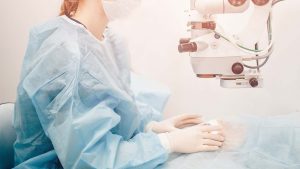 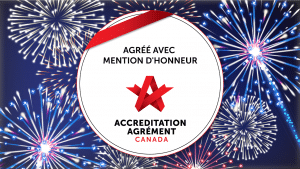 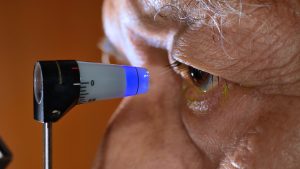